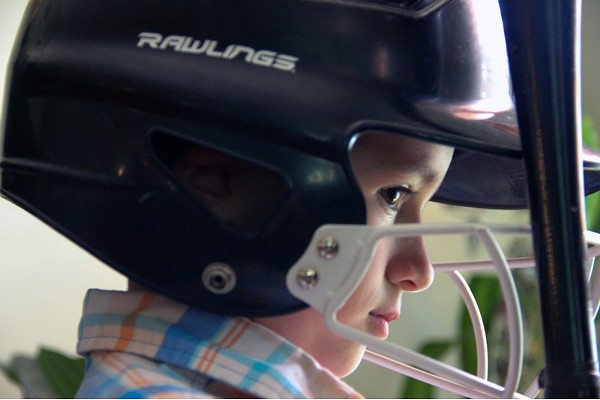 On a recent afternoon in June, four boys, none older than ten, tumble out of the front door of a home in west St. Louis County, their playgroup already in motion.

Three of the boys are trans. All four are friends, bonds they’ve maintained during the past year of pandemic Zoom calls after first meeting as classmates and teammates in St. Louis-area youth leagues.

Equipped with pogo sticks and basketballs, the boys run toward the backyard, passing through a group of adults sitting beneath the shade of a patio. One boy is briefly detained when his father notices, and objects, to his son’s lack of shoes.

“He’s never felt anything but pride in being trans,” the father says moments later, watching his son dash around the corner to rejoin his friends. “The school threw a party in his classroom on the year anniversary of him transitioning. The first graders in his class who knew him by a different name — it was nothing to them. It was drama free.”

“I really mean it,” he adds. “The only bullies in our kid’s life are in the state legislature.”

Not every trans kid is raised in such a family, surrounded by supportive friends, relatives and teachers. But for Missouri parents of trans kids, conflict with the legislature is part of the package: For years, conservative lawmakers have repeatedly advanced anti-trans proposals that target trans children directly: In 2021, they included an attempt that would restrict trans student athletes to playing on teams that matched the gender assigned at birth. Another bill, even more far-reaching, sought to expose parents to criminal charges of child abuse if they gave their trans kids doctor-prescribed hormones and puberty-delaying treatments.

Those bills failed to become laws in 2021, but that may only buy families of trans children more time. On this day, while the kids play in the backyard, their parents are already worrying about next year’s legislative session.

“It’s this idea that my kid doesn’t know who he is, or what he feels,” says the mother of one of the trans boys. “They’re basically telling me that my kid is not human.”

It’s more than an idea. For some trans families, fighting the Missouri legislature has become a regular part of their lives. Three of those families opened up to the Riverfront Times for this story, describing both their pride in watching their children flourish — and a duty to defend them in hostile territory.

On March 10, Daniel Bogard, a rabbi in St. Louis’ Central Reform Synagogue, arrived in the state capitol, one of more than a dozen speakers registered to speak in opposition to House Bill 33. The bill moved to ban doctors from administering “any medical or surgical treatment for the purpose of gender reassignment” before the age of eighteen.

This was a near repeat of 2020, when similar bills drew doctors and advocates from across the state to oppose them at committee hearings. Also in opposition were multiple families of trans children and teens who were themselves undergoing, and benefiting from, the hormone treatments lawmakers wanted to ban.

Bogard had been among those families. This year, the rabbi woke before sunrise and, leaving his young trans child at home with his wife, made the two-hour drive to Jefferson City to face the House Committee on Children and Families.

Bogard had arrived early for the 8 a.m. hearing, but there were so many speakers he was pushed to an afternoon overflow session. When he finally rose to address the committee, the rabbi described what it was like to lie awake at night thinking of suicide rates and how puberty would force his child “to feel every day like your body is betraying you.”

It wasn’t the first time Bogard had driven to the state capitol to testify against legislation. He had watched as multiple young trans people struggled through tears during their testimonies, breaking down in sobs under questioning from lawmakers.